P-Values and Confidence Intervals are commonly used throughout scientific literature as a means to measure a study’s results. But do you really understand what a ‘P-Value’ denotes and how it differs from a ‘Confidence Interval’? This article explores their definitions, their uses, why they provide complementary types of information and why they aren’t quite what they seem.

Hypothesis Testing: This is used in confirmatory studies where you to test the validity of a claim (the null hypothesis (H0)) that is being made about a population. If the claim is found not to be valid, then we will choose the alternative hypothesis (H1) instead. We can use the P-Value to weigh the strength of evidence and determine if the evidence is statistically significant.

This is usually a hypothesis of “no difference”. Each study should have a null hypothesis defined before it begins. Example: “there IS NO difference in blood pressure between placebo and trial groups after taking the medication”.

This is the hypothesis that you set out to investigate (i.e. the opposite of the null hypothesis). Example: “there IS a difference in blood pressure between placebo and trial groups after taking the medication”.

Significance Level (alpha): This is a term used to refer to an arbitrary pre-chosen probability below which you will reject the null hypothesis (H0). It is the probability of a Type 1 Error you are happy to accept. It is always set before an experiment to avoid bias. Any P-Values below this limit are said to be statistically significant. Commonly seen values include P <0.05 or P<0.01.

This is the false rejection of the null hypothesis (H0).

This is the false acceptance of the null hypothesis (H0). 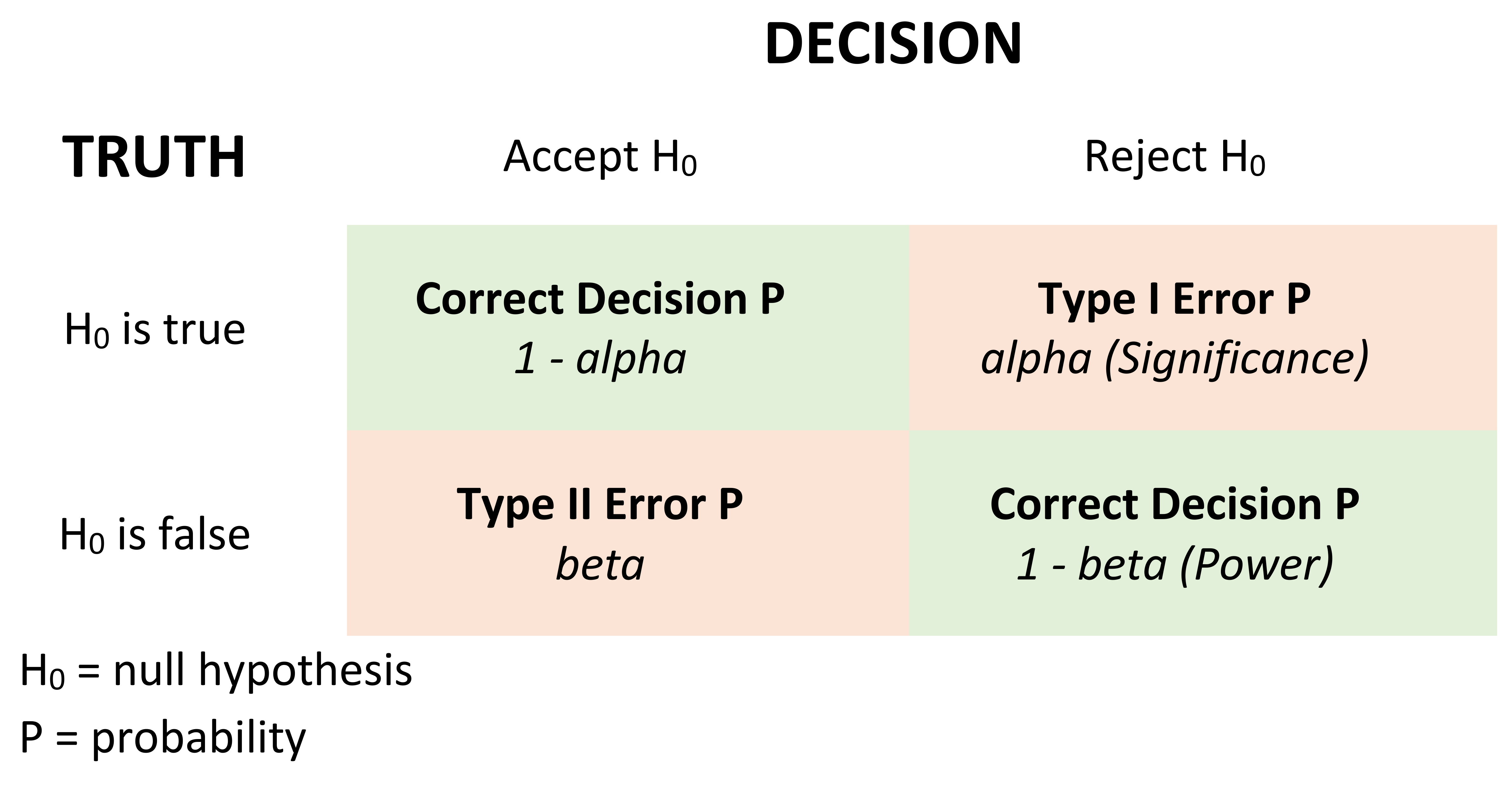 Confidence intervals convey more information than P-Values alone; they reflect the results at the level of data measurement. Confidence intervals provide information about a range in which the true value lies with a certain degree of probability, as well as the direction and strength of the demonstrated effect. This enables conclusions to be drawn about the statistical plausibility and clinical relevance of the study findings. So, what is a confidence interval?

This is a range of values calculated by statistical methods which includes the desired true parameter with a probability defined in advance (usually the confidence level).

The confidence level sets the boundaries of the confidence interval. It is conventionally set at 95% to coincide with the 5% convention of statistical significance in hypothesis testing.

95% Confidence Interval: This is the interval that you are 95% certain contains the true population value as it might be estimated from a much larger study. One interpretation of this is that the interval will contain the true value on 95% of occasions if a study were repeated many times using samples from the same population.

Final Thoughts: Values below the lower limit or above the upper limit are not excluded but are improbable. Values within the confidence limits, but near to the limits, are less probable than values near the point estimate (usually the mean difference) where the point estimate is the best approximation for the true value for the population.

P-Values are somewhat of a controversial topic within the realm of statisticians. Multiple articles have been published which denounce their improper use, including one popular article “Scientific Method: Statistical Errors” published within Nature in 2014. The uproar created by all of these articles spurred the American Statistical Association (ASA) to publish a consensus statement on P-Values in 2016. Both articles are worth reading and taking some time to mull over. What follows is a summary of these articles.

In February 2014 a professor of mathematics and statistics asked two questions: “Why do so many colleges and grad schools teach p = 0.05?”. The reply came as “Because that’s still what the scientific community and journal editors use”. Next, he asked “Why do so many people still use p = 0.05?”. The reply came as “Because that is what they were taught in college or grad school”. In other words, we teach it because it’s what we do; we do it because it’s what we teach.

The story begins with Ronald Fisher in the 1920s. He created the P-Value as an informal way to judge whether the evidence was significant ‘in the old-fashioned’ sense. In other words, was the evidence worthy of a second look? The idea was to run an experiment and see if the results were consistent with what random chance might produce. This experiment materialised itself as what is now known as the ‘hypothesis test’. Researchers would set a ‘null hypothesis’ that they wanted to disprove. They would then play devil’s advocate by assuming this null hypothesis was in fact true and calculate the chances of getting results at least as extreme as what was actually observed. This probability is known as the P-Value. The smaller the P-Value, the greater the likelihood the null hypothesis was false.

While the P-Value can be a useful statistical measure, it is commonly misused and misinterpreted. This can lead to issues with reproducibility and replicability of scientific conclusions.

One common misinterpretation is the notion that a ‘P-Value of 0.01 means there is a 1% chance of the results being a false alarm’. This is wrong. All the P-Value can do is summarise the probability of finding the observed (or more extreme) results when the null hypothesis of a study question is true. This misinterpretation is rooted in the assumption that it is possible to work backwards from the P-Value and make statements about the underlying reality. This is wrong. To make a statement about the underlying reality would require the odds that a real effect was there in the first place. Thus, the more implausible the null hypothesis (i.e. smaller odds that a real effect was there), the greater the chance that an exciting finding is a false alarm, no matter what the P-Value is (see probable cause below).

A further problem with P-Values is that they deflect attention from the actual size of an effect and do not indicate the practical relevance of the findings. For example, the P-Value may be statistically significant, but the observed effect may actually be so minimal that it would have little to no impact on the real-world application of the study. Think about a medication which has a statistically significant impact (P<0.01) on increasing the life expectancy of a patient by 3 days. This medication, although shown to confer a small survival benefit, may well not be cost-effective nor acceptable with the side-effect profile. The P-Value does not answer the all-important question “How much of an effect is there?”.

A further problem is many researchers have been found to manipulate their data, both consciously and unconsciously, to uncover statistically significant P-Values. This is known as P-Hacking. Essentially, they try many different combinations of analysis until they get the desired result.

So, what can be done? Well, researchers should always report the effect sizes and the confidence intervals of their results. This conveys the magnitude and relative importance of an effect. Additionally, researchers might consider using methods that include Bayes’ rule to describe the probability as the plausibility of an outcome rather than as the potential frequency of that outcome (see probable cause below). This does include some subjectivity, but it will allow observers to incorporate what they know about the world into their conclusions. This method involves bringing elements of scientific judgement about the plausibility of a hypothesis and study limitations into their analysis. Alternatively, researchers could perform a two-stage analysis where an exploratory study is performed to gather interesting findings and then a confirmatory study is planned, publicly pre-registered on a database and then performed as per the registered protocol. This allows freedom and flexibility in the study design while ensuring data is not manipulated in an effort to find a significant result. Finally, the most important thing that researchers can do is to admit everything. They should report how they determined their sample size, describe all data exclusions (if any), describe all manipulations and describe all measures within the study. Remember, the numbers are where the scientific discussion should start, not end.

Principles of ASA Statement on P-Values